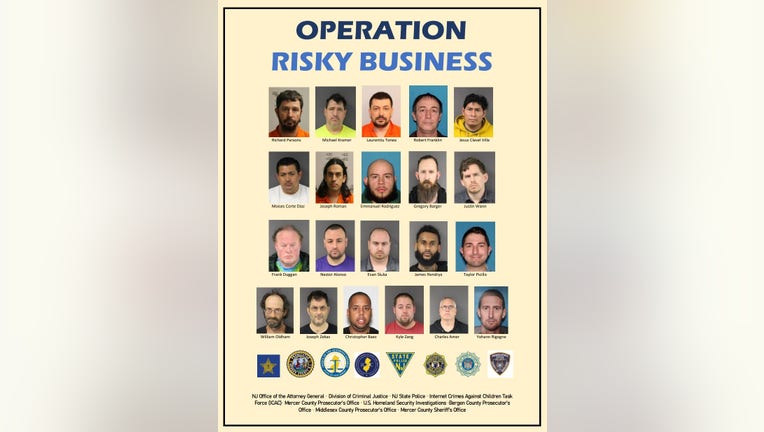 NJ officials say 21 men have been arrested in a sting targeting men who use social media to lure children for sex.

TRENTON, N.J. – Authorities say 21 men have been arrested in a sting known as “Operation Risky Business,” which targeted predators who used social media to lure children for sex.

According to the announcement, undercover officers posed as children online.

Most of the men who were caught in the operation were arrested at the operations’ undercover residence in Hamilton Township or another location, including the Hamilton Train Station, authorities say.

Officials say the men who went to the undercover house allegedly expected to find underage children home alone, but instead found law enforcement officers prepared to arrest them.

Of the men arrested, four were Megan’s Law registrants and the group also included a man chatting online with two separate undercover officers, according to authorities.

“Operation Risky Business is a great example of how successful law enforcement agencies can be when they collaborate across all levels like they did here by proactively investigating and arresting predators who sought to sexually exploit children,” Platkin said.

Half of the arrests were made over a four-day period in April and the defendants were from multiple states, including New Jersey, New York, Pennsylvania and Georgia, authorities say. Warrants for the remainder of the suspects were sent to the U.S. Marshals Service and the men were tracked down and arrested over the last few weeks, per officials.

The men face a variety of different charges, including, attempted luring, attempted sexual assault, attempted endangering the welfare of a child and attempted criminal sexual contact.

Onfori is advising parents to familiarize themselves with the social media apps their children use. “Spending an increasing amount of time online, becoming secretive about their online conduct, switching screens or closing tabs or windows whenever a parent is close, using sexual language they would not be expected to know and becoming emotionally volitive, these are all red flags,” he said.

The following men have been charged in connection with the operation:

Arranging car rentals does not…