The storm that swept through southern Ontario and parts of Quebec on Saturday, May 21, caused over C$875 million (US$676.3 million) in insured damages, according to the Insurance Bureau of Canada, which quoted initial estimates from Catastrophe Indices and Quantification Inc. (CatIQ).

This storm now ranks as the sixth largest in Canadian history in terms of insured losses – surpassing the Toronto flood of 2005, said IBC. 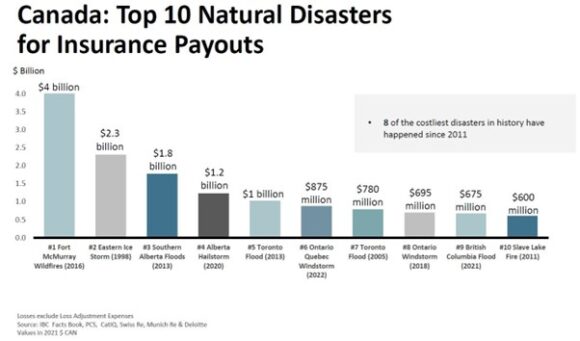 The powerful storm, described as a derecho, was far-reaching and impacted a densely populated corridor across southern Ontario and into Quebec. Close to 30,000 homes in Ontario and Quebec were without power for more than a week after the storm. Although hail and torrential rain accompanied the storm, wind caused most of the property damage.

The IBC said the derecho event “is a sobering reminder of the increasing risk climate change poses to communities across Canada.”

The amount of insured damages are estimates provided by CatIQ under license to the IBC, which is the industry association representing Canada’s private home, auto and business insurers. Its member companies make up 90% of the property/casualty insurance market in Canada. CatIQ is a subsidiary of PERILS AG, the independent Zurich-based organization that provides industry-wide catastrophe insurance data.

Photograph: A person walks past a part of the roof of a hardware store that lifted off and crashed into neighboring houses during a major storm, in the community of Hammond in Clarence-Rockland, Ontario, on Monday, May 23, 2022. Photo credit: Justin Tang/The Canadian Press via AP.

Get automatic alerts for this topic.